For years now, we’ve known that Apple has been working on a method to reintroduce Touch ID as an in-screen sensor. The company has also been working on ways to shrink its Face ID module to further increase screen-to-bezel ratios and overall iPhone display sizes. Now, Apple has been granted patents for these upcoming improvements.

The US patent office has granted Apple a new patent today, which describes how Face ID and Touch ID can be embedded into a display. Not only could this impact future iPhones and iPads, but this could also be used to bring Face ID to Macs and MacBooks.

As reported by PatentlyApple, the new tech uses an optical imaging array positioned behind a display and oriented to receive light transmitted through the display. The array can then be used for any suitable imaging, sensing or data aggregation purpose, including fingerprint and iris scanning.

KitGuru Says: We may finally see Apple make the jump to an in-display fingerprint sensor, something that many Android devices adopted over the last few years.

Netflix to add video games to its streaming library 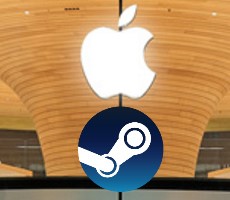