Designed for “enthusiast-level gaming in laptops as thin as 16 millimetres.”, Intel has announced its first three Tiger Lake-H processors. Additionally, the company also shed some light on its upcoming Rocket Lake-S and Alder Lake-S processor architectures, including the release windows for both product series.

Starting with Tiger Lake-H35, here Intel claims it has created a new laptop segment, offering ultraportable laptops (as slim as 16mm) with “enthusiast level gaming prowess”. Featuring PCIe Gen4 and Intel Killer Wi-Fi 6/6E technology, the new Tiger Lake-H35 series will consist of three SKUs with up to 4x cores, 8x threads, 35W TDP design, and a maximum operating frequency of 5.0GHz. Tiger Lake-H processors featuring up to 8x cores, 16x threads, 20x PCIe lanes, and a 45W TDP will come later this quarter. By the first half of 2021, Intel plans to have over 40 laptops available in this market from partners such as Acer, MSI, Asus, Lenovo, HP, Dell, and Vaio.

Intel 11th Gen Core processors for ultraportable gaming will support DDR4-3200 or LPDDR4/x-4267, Thunderbolt 4, and Resizable BAR. Thanks to Intel’s SuperFin architecture, Tiger Lake-H35 processors will run at up to 5.0GHz at 35W, offering around 15% more performance than their predecessors. At 15W, Intel says these chips will offer about 9% more performance in single-core workloads and over 40% more performance in multi-thread workloads when compared to Intel 11th Gen Core processors. We are also told the current flagship Tiger Lake-H35 processor can outperform the Ryzen 9 4900H by up  30% in the SPECRATE *2017_int_base single-thread benchmark.

The following table details the first Tiger Lake-H processors to be released:

Besides Rocket Lake-S, there was also some talk of Alder Lake-S. This series is scheduled to release in the second half of 2021, and it will be Intel’s first architecture to make use of “a new, enhanced version of 10nm SuperFin”. Intel also confirmed that Alder Lake-S CPUs will consist of both high-performance (big) cores and high-efficiency (small) cores, meaning that it will feature a hybrid design similar to its Lakefield processors.

KitGuru says: Will you wait for Rocket Lake-S or Alder Lake-S processors before upgrading your system? 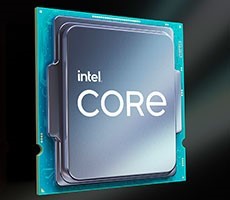