Intel Alder Lake-S is leaking again. This time around, we have new details on an engineering sample for an Intel Core-1800 CPU, a 16C/24T processor. A datasheet has also found its way online, detailing all remaining specifications, including maximum operating clocks, power limits, T-Junction, and more.

The datasheet, which was shared by Igor’s LAB, shows that this particular engineering sample is a B0 stepping, meaning specifications are likely not final. Following the same logic, the Core-1800 codename likely won’t be the final name for this processor.

According to the datasheet, the Core-1800 features 8 big ‘Golden Cove’ cores with Hyper Threading and 8x Atom ‘Gracemont’ cores with no Hyper Threading. The base clock for all cores is set at a rather low 1.8GHz, but boost clocks can reach up to 4.6GHz on two big cores, 4.4GHz on up to four, 4.2GHz on up to six, and 4.0GHz on all. As for the Atom cores, four of them can go up to 3.4GHz, but eight can only go as high as 3.0GHz.

The CPU power values listed in the specifications suggest the processor will feature a 125W TDP/PL1, with a 56sec tau, and a PL2 of 228W with a 2.44ms tau. The processors’ maximum junction temperature is reportedly 100ºC. The processor was running at 1.3147V.

Intel Alder Lake processors will be based on the LGA 1700 socket, and support PCIe 5.0, and DDR5-4800 and DDR4-3200 memory, depending on the motherboard. Rumours claim only the Z690 motherboards will support DDR5 memory, leaving the mainstream and entry-level ‘H’ and ‘B’ motherboards with support for DDR4.

KitGuru says: Considering the Intel Core-1800 is just an ES2, there’s still room for improvement. Base and boost clocks should increase slightly in latter revisions, possibly hitting 5.0GHz while boosting. 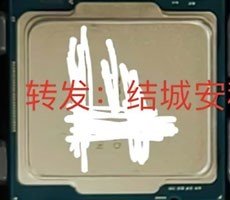