The first Everspace game went on to be a huge success for indie developer Rockfish Games and soon, we’ll be able to get our hands on the sequel. Today, Rockfish Games announced that Everspace 2 will be launching in Early Access on Steam and GOG this month.

All core gameplay mechanics will be there at the start, including space combat, exploration, mining, puzzle solving, traveling, trading, crafting, ship customisation and player/companion perks for additional character build customisation. There will be five ship subclasses to start off with.

Michael Schade, CEO & co-founder of ROCKFISH Games had this to say about the early access launch: “After multiple rounds of community testing by some 2,000 players, and great feedback from various gaming outlets and content creators on the closed Beta, EVERSPACE 2 is ready for Early Access. We can’t wait to receive feedback on the initial release version from space game enthusiasts on Steam and GOG”.

Early access development should continue for the next 12 to 18 months, so we can expect the full version of Everspace 2 between late 2021 and mid 2022. Due to high demand, the early access version of the game will ship with full HOTAS support right from the get-go.

KitGuru Says: I’ve been looking forward to Everspace 2 for a while now. Did many of you play the original? Will you be checking out the sequel this year? 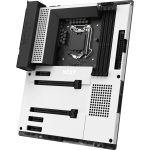 Renders of the NZXT N7 Z490 motherboard have surfaced