Final Fantasy XIV is set to end the year strong, with the developers today announcing the next major patch. Final Fantasy XIV 5.4 “Futures Rewritten” will set players out on a new main scenario following the finale of the Shadowbringers expansion.

Patch notes for this next major update are just part of the story. Today, Square Enix also confirmed that Final Fantasy XIV will be playable on PS5 via backwards compatibility mode. It will use the game’s PS4 Pro graphics settings, while the PS5’s SSD will bring a big boost to load times.

Here are the current patch notes for Update 5.4:

The 5.4 update will be coming in December. Before that though, patch 5.35 will be arriving on the 13th of October, bringing the ‘Save the Queen’ questline, written by designer Yasumi Matsuno, best known for his work on Final Fantasy Tactics and Final Fantasy XII.

KitGuru Says: I’ve been diving back into Final Fantasy XIV more recently to check out the new player experience improvements added in Update 5.3. Have many of you been playing Final Fantasy XIV this year? Are you looking forward to the next major content update? 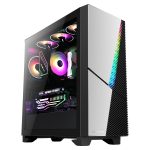