Over the last six months, multiple sources have claimed that Netflix is working towards offering games as part of its streaming package. This was essentially confirmed earlier this month, after the hiring of a prominent gaming veteran to oversee development. Last night, Netflix confirmed its gaming plans, although it will be focusing on smaller mobile games to begin with.

During Netflix’s quarterly earnings report, the company confirmed to investors that it is “further expanding into games”, building off of the success of previous interactive experiments, such as Black Mirror Bandersnatch, or the retro-style Stranger Things games.

As previously reported, games on Netflix will be offered as part of the regular catalogue, so they won’t cost extra, or be limited to a new subscription tier. However, we won’t be getting major titles on Netflix in the immediate future. Instead, Netflix will be focusing its initial efforts on games for mobile devices.

This will be a new content category for Netflix, so expect to see a build up similar to Netflix’s push into original movies and TV shows. Exactly when we can expect to see the first game on Netflix still remains to be seen.

KitGuru Says: Netflix is indeed getting into games, just as anticipated. Hopefully we’ll learn more about what titles to expect in the months to come.

The post Netflix’s gaming efforts will focus on mobile at first first appeared on KitGuru.

God of War gets PS5 patch 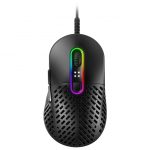