AMD’s flagship RDNA 2 GPUs have been out for a while now, which means it is time to start looking ahead to the next generation. AMD is currently working on its RDNA 3 GPU architecture, and according to early leaks, we can expect at least a 40% performance improvement.

A new video from Moore’s Law is Dead goes over the latest leaks for the flagship RDNA 3 GPU, currently referred to as the RX 7900 XT. With AMD’s new architecture improvements, the next flagship is expected to deliver at least 40 percent more performance compared to the current generation, although internally, AMD is hoping to reach even higher. It will not offer three times the performance of the RX 6900 XT though, which is something a few leaks have suggested.

As we know, AMD has officially stated that it is aiming for a 50 percent performance per watt improvement with RDNA 3. The new GPU architecture is expected to feature a chiplet-based design too, similar to Ryzen processors, which will open the door for greater scalability with future architecture iterations.

Of course, RDNA 3 is still many months away and won’t be launching until next year, so the design won’t be finalised yet and plans could change.

KitGuru Says: Given the current GPU shortage, are you planning on waiting for next-gen GPUs like RDNA 3 before upgrading? 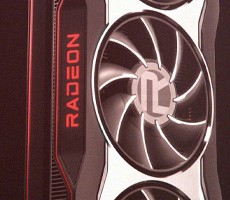